In 2013 the Cartwright Group were awarded from the Regional Growth Fund a grant of almost £2 million. The Application and the strategy were project managed by Support2business Ltd and this resulted in the project being successful, celebrated on the 16th May, by the visit of Nick Clegg to Cartwright Group. 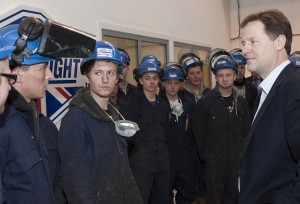 DEPUTY Prime Minister Nick Clegg hailed the impact of the Regional Growth Fund as he visited a North West manufacturer which is planning to create 300 jobs over the next three years.

Visiting family-owned trailer maker Cartwright Group’s factory at Broadheath near Altrincham, Mr Clegg said that despite considerable “cynicism” about the £2.6bn RGF, it is creating jobs and helping stimulate growth outside the south.

He said :”For every £1 invested by the tax-payer through the Regional Growth Fund, £6 comes from the private sector. It will create or safeguard 85,000 jobs here in the North West.

The number of applicants for Regional Growth Fund money in latest round comes from the North West and I think it is a real tribute to the go-getting spirit of many companies in this region.”

He praised Cartwright for its pledge to take on 30 new apprentices a year over the next three years, and said giving young people a chance was a “massive priority”

“One of the most important things we face as a country is giving young people the sense of optimism and hope that they can get their feet on the first rung of the jobs ladder. That’s why I am a huge supporter of apprenticeships; we have massively expanded apprenticeships on a scale this country has not seen for a generation.

“We will be delivering and funding about 250,000 more apprenticeships during in this Parliament than planned by the previous Labour administration, that’s something I am very  proud of at a time when there is not much money around. ”

Cartwright which builds trailers for well-known brands including TNT, Royal Mail and Airbus, were awarded £1.9m from the Regional Growth Fund.

Along with the RGF cash the company has invested a further £2.9m.

Mr Clegg said: “The Cartwright Group has a reputation of excellence and it is great news that they are using Regional Growth Fund cash to continue to expand their manufacturing lines, including building ambulances – a project that can create 300 jobs over the next three years and will see their business grow.

“What makes this company successful is that they believe in their staff – the lifeblood of the company – and commit to a continuous investment programme in training so it can grow and bring new people to help with the development of the business. This is what the Regional Growth Fund is all about.

“There are more people in work today than there were before the financial crisis, we are close to record levels  – since 2010, we have helped to create over 1.2 million jobs in the private sector, including 82,000 here in the North West.”

Steven Cartwright, joint managing director of Cartwright said: “We have only just celebrated 60 years in manufacturing and the financial assistance we have received through the Regional Growth Fund will help us with our plans to take the company to the next level, developing new products and services as well as creating new jobs in order to help us to maintain our position as the UK’s leading body and trailer manufacturer offering the widest range of product and related services in the industry.

“We are committed to growing the business and that will require more people in all areas of the organisation from apprentices through to senior executive roles. Our apprentices today will become our managers of tomorrow and help to create a platform to keep Cartwright at the leading edge of manufacturing for many years to come.

“However we would call upon Government to help our industry to attract more young people to consider a career in manufacturing.

“We are proactive in finding youngsters for our apprenticeship scheme. It would be great if a more joined up approach through the schools, with the help of the government, was in place to help build the awareness of manufacturing as a serious career option.”

Phil Orford, chief executive of the Forum of Private Business, of which Cartwright is one of the largest members, said: “Cartwright Group demonstrate all that’s good about UK manufacturing, investing in growth, recruiting dozens of apprentices and linking with colleges and schools to develop work ready youngsters. Rebalancing the economy needs more success stories like Cartwright.”

In the North West, the first three rounds of the Regional Growth Fund have invested  £378m into 75 projects.

Bidding for the fourth round of the fund, worth £350m recently closed, with the North West leading the applications with 58 proposals bidding for £316m.

This site uses Akismet to reduce spam. Learn how your comment data is processed.

Can we help you too?

We have a proven methodology which gets funding for small business owners, financing a wide range of activities.

Based on your "Investment Readiness" our approach takes you through the steps needed to stand the best chance of obtaining funding. We support you throughout the process and where needed help you with the preparations.

Our fees are substantially based on "no-win-no-fee" unless you require more help to become Investment Ready.